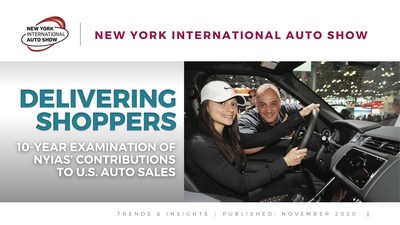 Foresight examined data from the past 10 years analyzing Show attendance, demographics, media influence, value and purchase influence of the event.

The report also includes data on the importance of auto shows across the country and reveals that shows are most influential marketing channel for attendees, ahead of digital, television, direct marketing, branded drive events and others.

The Foresight report also found that in New York over the past decade:

"No other marketing tool supplies automakers with the volume, reach, depth or impact that auto shows do", said Mark Schienberg, president of the Greater New York Automobile Dealers Association, the organization that owns and operates the New York Auto Show. "Attendees not only want to look at cars, but they want to be informed and engaged during the experience."

Schienberg added: "There's a reason why auto shows have been around for 120 years. It's because they work."

Dealers agree. According to NADA's Dealer Attitude Study, 77% of dealers in auto show markets say their franchise brands' absence from an auto show would hurt customer awareness, 70% say it would drive down dealership traffic, and 69% say it would depress retail sales.

Click here for the complete report, A Decade of Delivering Results: 10-Year Review of the NYIAS Contributions' to U.S. Auto Sales.

About the New York Auto Show

The next New York International Automobile Show takes place August 20 - 29, 2021.  Press day is Thursday, August 19, 2021.  The New York International Auto Show is owned and produced by the Greater New York Automobile Dealers Association, has an economic impact on New York City of more than $300 million annually and is North America's first and largest-attended auto show dating back to 1900.